China’s power rationing is widening. So far, the power cuts have expanded to 20 provinces and autonomous regions, including major polysilicon and wafer manufacturing hubs Yunnan, as well as Jiangsu and Zhejiang, where most cell, module, and BOM material manufacturers are based. The power curbs have impacted Tier-1 manufacturers of polysilicon, wafer, and EVA, which have experienced severer shortages since early September. 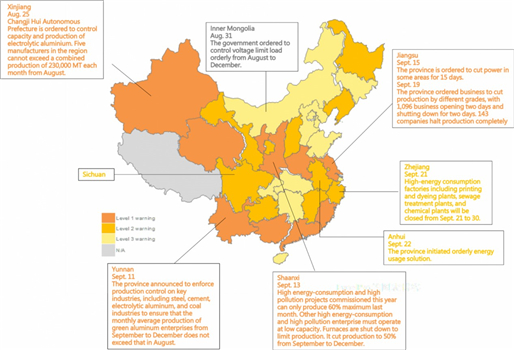 From the middle of September, impacts on the wafer segment slightly went beyond the cell segment, with supply shortages escalating. In the face of wafer shortages, buyers had no choice but accept higher prices after leading manufacturer Longi raised prices markedly in mid-September.

China’s forced cuts to silicon metal production and manufacturers’ reluctant to sell caused silicon metal prices to double to RMB 50-60/kg in the last week of September, pushing up polysilicon costs. In response, some polysilicon manufacturers are reportedly to have raised prices to as high as RMB 230-260/kg. Compared to the pre-power rationing level of RMB 210/kg, the price spike caught buyers in the mid and downstream off the guard.

With polysilicon prices skyrocketing, module orders signed earlier in China and abroad are delivered at a loss. Therefore, quite a few module makers began to halt delivery. The world saw PV plants and module manufacturers either renegotiate prices or postpone projects.

Just a day before the National Day holiday begins, mono-Si wafer manufacturer giant Zhonghuan published its prices, which surged significantly. This round of price increase adds RMB 0.077-0.086/W of costs to cells. It’s worth noting that Zhonghuan unveiled prices for 182mm wafers for the first time, a response to cell and module makers’ cuts to capacity utilization in October. In the face of shortages and project deferral worldwide, PV InfoLink will revise down forecast for global demand in the next issue of database report.